Did John Lennon make reference to the movie Rosemary’s Baby on the cover of the Imagine album?


Released in 1971, the Imagine album was John’s second solo album and contains the song that is considered his signature work, Imagine. The song Imagine is his most popular solo compositions and one of his most controversial.  On his official website (johnlennon.com) the song is described as “a call to idealism that has provided solace and inspiration at every moment of social and humanitarian crisis since it was written.” Many consider Imagine an anthem for world peace and justice, a utopian song. But there are just as many people who consider it an anthem of subversion, a dystopian nightmare. To imagine a world with no heaven or hell and religion is blasphemy and the worship of false idols.
Album covers have been used in the past to convey messages and The Beatles’ are no stranger to that! Over the course of music history no albums have been the subject of more interpretation and decoding than Beatle albums. In the 1960’s fans began to notice death clues on Beatles’ albums and messages of death in Beatles songs. The death clues of The Beatles became a phenomenon that continues to the present day. In the search for death clues fans slow down and speed up their music, play songs in reverse, analyze lyrics for meaning, album covers are examined in great detail, viewed through mirrors, read upside down and backwards, words are searched for anagrams, all in the search for clues foretelling the death of a Beatle.


Music and art go hand in hand and it’s said you can judge a book by its cover. The Imagine album jacket is the simplest design with only two pictures of John, one picture on the front cover and one on the back and three words – Imagine John Lennon. But the simple can sometimes have complicated meaning. A few years ago, claumusic33 from Argentina posted a YouTube video titled john lennon prophecy. The video is only 19 seconds, a little blurry, but its message is clear.

The author links the picture of John on the back cover of the Imagine album with the advertisement photo of Mia Farrow (Rosemary) used in the Roman Polanski movie Rosemary’s Baby.  When I first viewed the video I thought it was curious and believed it to be true. John was making a reference to Rosemary’s Baby. But like many of the messages the Beatles’ were sending out this one appeared veiled.  The picture of John on the back cover facing upwards is suggestive of Rosemary’s Baby but cryptic at best.  What’s not so clear in the video is the style of lettering used on both the Imagine album and in the promotion of the movie Rosemary’s Baby. When you look closely at the lettering, if you read the fine print, it all comes into focus. 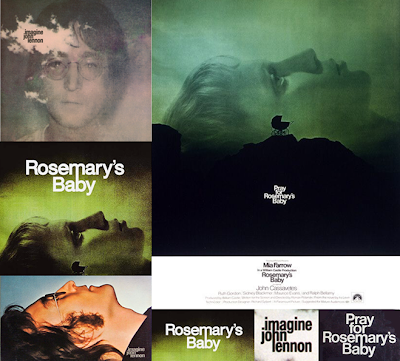 John was making a reference to the movie Rosemary’s Baby. The movie was released on June 12, 1968. It is a story about the occult and Satanism and raises the question should one make a deal with the devil in order to reach life’s goals. The backdrop for the movie was the Dakota Apartment building in NYC. John would move into the Dakota Apartments in April of 1973 and it was the place of his murder in 1980.

The date John chose to release the Imagine album fits well with the jacket design, September 9, 1971. John had very good knowledge of the occult and numerology. He was obsessed with the number 9 and believed it held special meaning throughout his life. September is the 9th month, on the 9th day, in the year 1971 (1 + 9 + 7 + 1 = 18 = 9). The number 9 holds powerful significance and symbolism in the occult where the power of words and numbers are amplified in reversing, mirroring and inverting them. When the number 9 is turned upside down you get the number 6, the number of the beast (666) in the Bible’s book of Revelations. September 9, 1971 = 999 inverted to 666. It was also the 252nd (9) day of the year.
The messages John was sending out with the Imagine album is a perfect storm of clues (or for those who don’t believe, a super coincidence). In 1971, Rolling Stone Magazine called the Imagine album, John’s self-portrait. Had John used the Imagine album to portray an image of self and reveal personal secrets the message is clear. His reference to Rosemary’s Baby on the album jacket (a movie about the occult and Satanism and a man making a deal with the devil), the album release date of September 9, 1971 (in numerology 999 becomes 666), and his anthem in the song Imagine of imagining a world with no heaven or hell and no religion, a song John admitted was anti-religious. It was all intentional. The bigger question is why would John use such symbolism on the Imagine album? Who was he sending a message to and why? The answer to both these questions may be Paul McCartney and the Ram album. To answer the question we have to look and see what messages and symbolism Paul used on the Ram album to evoke a response from John. There may have been more messages being sent back and forth by Paul and John than either would admit. The design of the Imagine album, the release date, as well as the song Imagine may have all been a response to Paul and the Ram album. 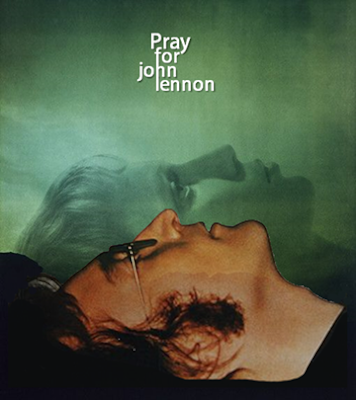