Full Sstory: Telegraph.co.uk
More than 40 years after Christians were infuriated by the Beatles' claim that they were "more popular than Jesus", the Roman Catholic Church has made peace with the Fab Four.

Saturday's edition of the Vatican's official newspaper absolves John Lennon of his notorious remark, saying that "after so many years it sounds merely like the boasting of an English working-class lad struggling to cope with unexpected success".

In a lengthy editorial marking the 40th anniversary of the Beatles' famous White Album, L'Osservatore Romano heaps lavish praise on the British band.

"The talent of Lennon and the other Beatles gave us some of the best pages in modern pop music," said the newspaper, which has recently tried to shake off its stuffy image by covering popular culture events such as the Oscars and inviting articles from Muslim and Jewish contributors.

Only "snobs" would dismiss the Beatles' songs, which had shown "an extraordinary resistance to the effects of time, providing inspiration for several generations of pop musicians", said the newspaper, regarded as the Vatican's official mouthpiece.

It was in March 1966 that Lennon made his infamous claim.

"Christianity will go," he told a reporter from the Evening Standard.

"It will vanish and shrink We're more popular than Jesus now - I don't know which will go first, rock and roll or Christianity. Jesus was alright, but his disciples were thick and ordinary. It's them twisting it that ruins it for me." The boast provoked outrage, particularly in the United States, where conservative Christians burned piles of Beatles albums. The band received death threats and radio stations, particularly in the South, stopped playing Beatles records.

More than a decade later Lennon said he was glad of the furore he had caused. "My life with the Beatles had become a trap," he wrote in 1978.

"I always remember to thank Jesus for the end of my touring days; if I hadn't said that the Beatles were 'bigger than Jesus' and upset the very Christian Ku Klux Klan, well, Lord, I might still be up there with all the other performing fleas! God bless America. Thank you, Jesus."

Other outlets reporting on this 'sudden' forgiveness...

The Lennon Prophecy ($19.95, New Chapter Press, www.TheLennonProphecy.com) offers a new interpretation of the hidden messages and symbols that have ornamented Beatles mythology for years and offers the view that Lennon joined historical figures such as Mississippi “Crossroads“ blues guitarist Robert Johnson, Dr. Johann Faust, Pope Slyvester among others who entered into a pact with the devil to exchange their souls for earthly successes.

Niezgoda dissects and examines the Beatles' and Lennon’s recordings and album artwork and follows a fascinating and unique trail of sorcery, mysticism, numerology, backwards masking, anagrams and literary and theological writings to explain his conclusions.

The Lennon Prophecy, due in book stores in December, puts forth the theory that a 20-year-old Lennon, so disillusioned with a life of sadness and disappointment where he was abandoned by his father and stricken with the death of his mother, entered into a deal with the devil to achieve fame and fortune. Niezgoda puts forth that a 20-year pact began in December of 1960, shortly before a night when Beatlemania first struck audiences on December 27, 1960 when the Fab Four played at Town Hall Ballroom in Litherland, England. During that performance, as Niezgoda reports, “The Beatles evoked a response noticeably different from anything in their past.” From there, the Beatles inexplicably shot immediately to global fame never seen before or since. The 20-year pact came to its tragic conclusion on December 8, 1980, when Mark David Chapman, who testified he was possessed by demons, fulfilled the end of the contract by murdering Lennon outside of his apartment at The Dakota in New York City.

Clues foretelling the death of Lennon are revealed in album covers such as Rubber Soul, Yesterday and Today, A Collection of Beatles Oldies, Sgt. Pepper’s Lonely Hearts Club Band, Yellow Submarine, Magical Mystery Tour, Abbey Road as well as Lennon solo albums Imagine and Walls and Bridges. Songs that also reveal the mysterious prediction of death and connections to the devil include “Tomorrow Never Knows,” “I Am The Walrus,” “Come Together,” “One After 909,” “Let It Be,” “Sgt. Pepper’s Lonely Hearts Club Band,” and “Revolution No. 9,” which Niezgoda reveals is in itself a step-by-step preview of his actual assassination. The video for the biggest hit off Lennon’s last album “(Just Like) Starting Over” also reveals an intriguing clue that brings the literary world of James Joyce in the myriad of clues.

Lennon’s alleged anti-Christian behavior as well as famous declaration that the Beatles were “Bigger than Jesus” are also presented as evidence of a possible pact. Niezgoda also dispels the “Paul-is-Dead” mythology that theorized that the Beatles inserted clues in their songs how Paul McCartney was killed in a car crash.

A life-long Beatles fan, collector, and scholar, Niezgoda has researched John Lennon and the band for more than 25 years. He works in analog and digital music recording with an extensive background in music theory.

The single "(Just Like) Starting Over" was released a month before John Lennon died. The corresponding music video opens in a room containing some of John's most valuable possessions: Rickenbacker guitars and a Vox amplifier, amongst scattered pictures from his past. The camera scans the scene and momentarily stops on a shelf containing the James Joyce book Finnegans Wake. It is obvious when viewing the video that a conscious decision was made to include the book. Ask any director - prominent props don't happen by accident. But why Finnegan's Wake?

Watch the video, then visit TheLennonProphecy.com
to see more clues & to submit your own.
Posted by The Blog at 12:08 AM

Turn Me On Dead Man!!

Watch the video, then visit TheLennonProphecy.com
to see more clues & to submit your own.
Posted by The Blog at 12:07 AM

Visit The Lennon Prophecy Death Clues
to reveal the rest of this clue.

Coincidence? Click HERE and decide for yourself
Posted by The Blog at 12:04 AM

Mark David Chapman, Were We Warned? 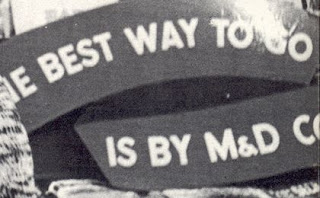 A partial photo from the Magical Mystery Tour album...
a sign which reads
'THE BEST WAY TO GO IS BY M&DC' or MDC.
It turns out to be a fatal message because it was
Mark David Chapman (initials MDC) who killed John.

VIEW THE ENTIRE CLUE HERE
Posted by The Blog at 12:03 AM An early photograph of the author holding a fan magazine
of his beloved Beatles. Taken at St. Jude's School circa 1967.
Posted by The Blog at 12:02 AM 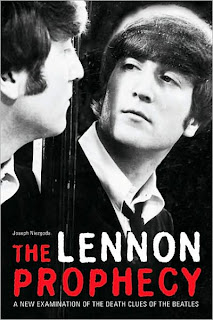