The Birthplace of Beatlemania

Why the mayhem started and why it was occurring around The Beatles is a question asked from the very beginning of their success. What could possibly explain the rapid, spontaneous, widespread worldwide overreaction to the Beatles? Nothing before or since comes close to equaling the emotional epidemic surrounding the Beatles. Girls went to their concerts and wept uncontrollably; they covered their ears and screamed at the mere sight of the Beatles. Boys as well were lured by their charm. Their audiences were described as hypnotic, spellbound, transfixed and in ecstasy in their presence. The hysteria and mania they evoked left the world dumbfounded. Everywhere they traveled they created bedlam. Their lives were the center of a continuous unrestrained uproar.

The media continually pressed them for an answer:

Melbourne, Australia, June 14, 1964. Q: "In view of the fact that you've had so much experience now with crowd hysteria, are you still at a loss to put your finger on the reason why?"

Q: "Can we ask you to amplify the point, how this hysteria generates? Nobody seems to be able to put their finger on a reason why. It seems to be a combination of things. What do you believe it is?"

American writer Jean Shephard travelled with the Beatles during their 1964 British tour and described Beatlemania:

“I joined the Beatles in Edinburgh in the midst of a wild, swinging personal appearance tour they were making throughout the British Isles. The first glimpse I had of them was in a tiny, overheated, totally disorganized dressing room backstage between their first and second shows. I had taken the night flight up from London and suddenly found myself face to face with one, or rather four, of the 20th Century’s major living legends. All of them looked up suspiciously as I walked in, then went back to eating, drinking and tuning guitars as though I didn’t exist. Legends have a way of ignoring mere mortals. I looked hard at them through the cigarette smoke, and they began to come into focus, sprawling half-dressed and self-involved amid the continuous uproar that surrounds their lives. They had been playing one-night stands in Glasgow and Dundee, and I went with them from Edinburgh to Plymouth, Bournemouth and half a dozen other towns. They were all the same: wild, ravening multitudes, hundreds of policemen, mad rushes through the night in a black Austin Princess to a carefully guarded inn or chalet for a few fitful hours of sleep. And then the whole cycle started all over again. It became impossible to tell one town from another, since to us they were just a succession of dressing rooms and hotel suites. The screams were the same. It all assumed the ritual quality of a fertility rite. Latter-day druids, the Beatles sat in their dressing room – a plywood Stonehenge-surrounded 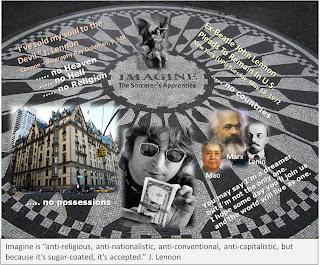 The album Imagine was released on September 9 (9th month; 9th day), 1971 (1 + 9 + 7 + 1 = 18; 1 + 8 = 9) of a 9 year. John Lennon admitted the song was "an anti-religious, anti-nationalistic, anti-conventional, anti-capitalistic song, but because it's sugar-coated, it's accepted." But not everyone accepted it. When it was released in 1971, Mark Chapman had just gone through a religious conversion and had become a ‘Jesus Freak’. He told his friend Miles McManus that Imagine was a communist song and that Lennon’s message ‘imagine a world with no heaven or religion’ was blasphemy. Mark grew up in the southeastern US Bible belt, Decatur, Georgia, and still held John’s ‘more popular than Jesus’ statement in contempt. He said, “Who the hell are they to compare themselves to Jesus.” Chapman would play the song Imagine on his guitar and sing, "Imagine John Lennon is dead!"

I like the song Imagine, but it is ‘flaming pie in the sky’.

In 1990, William F. Buckley wrote a editorial about the song. He refers to John as ‘The Sorcerer’s Apprentice’.