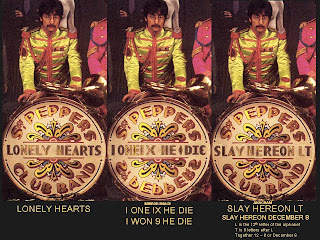 McCartney Resurrects a Moment in Lennon’s Past 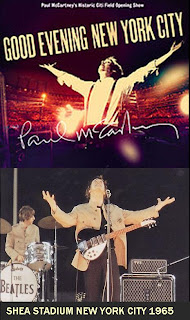 A resent photograph of Paul McCartney is featured on the cover of his latest video release Good Evening New York City. I found it to be strikingly and strangely similar in composition and color to that of a photograph taken of John Lennon during The Beatles 1965 Shea Stadium concert. The shot of Lennon with arms stretched wide and head held back looking to the heavens was taken at a time that might best be described as the apex of his career. Even more, the photo documents that exact moment in time when Lennon went from being just another entertainer to a living legend; a legend that came to the realization that all of his worldly desires had been exceeded when in describing the event was quoted as saying, “I saw the top of the mountain.” John also said the noise at Shea was “louder than God.”

Why such an uncanny photograph of McCartney would be employed if not only for the purpose of invoking the memory of what resulted for Lennon at Shea.
Posted by mn6024 at 10:07 AM No comments:

All the clues that's fit to print 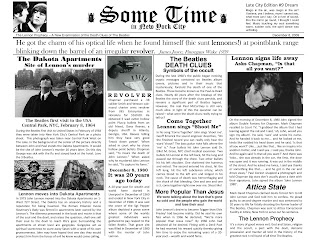