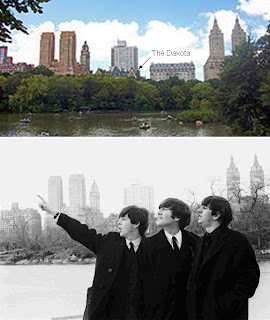 This picture of Paul, John and Ringo was taken in New York City’s Central Park during The Beatles first visit to the United States on February 8, 1964. Some years ago I noticed something strangely ominous about the shot.

The picture recently resurfaced when it was posted on their official website, TheBeatles.com.
Posted by The Blog at 8:01 PM