Many Paul-Is-Dead Clues don’t add up 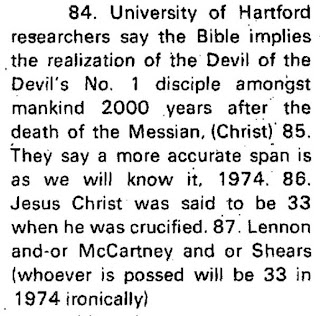 If we look at the clues referring to the death of Paul and his replacement in the band, there are many that don't come together in a way that makes sense.

A history of the Paul-Is-Dead rumor can be found in the book Turn Me on Dead Man by Andru J. Reeve. In the book Reeve’s raises a number of questions.

Was it just, “The most stupendous and elaborate hoax in the history of the world.”

Messages of morbid ‘clues’ of death splashed over Beatles’ LP’s. Should we look at these clues a little harder?

Either Paul is dead or something is going to happen. Why would fans expend so much time and energy, obsessively searching for death clues?

The question remains, what are the albums saying? Why have the Beatles had this fetish about death and accidents?

Many (most) of the clues can be interpreted just as easily as chance happenings. But when taken together in their totality, they insinuate the death of only one Beatle.
Read more »
Posted by mn6024 at 3:06 PM 3 comments:

Was this an early Beatle Death CLUE from 1966? I don't know, but it is an interesting story nonetheless because people did LINK the Beatle Burning with the lightning strike. There must have been a reason why.

On Saturday morning, August 13, Radio KLUE was taken off the air when a lightning bolt hit their transmission tower, knocking their news director unconscious and destroying much of their electronic equipment.


The radio station call letters were KLUE as in CLUE


The Longview newspaper said:
"Phil Ransom, news director, was knocked unconscious when the lightning coursed into the (KLUE) building and was rushed to Good Shepherd Hospital … Ransom regained consciousness shortly afterward and was believed in good condition, although he was being held for observation Saturday evening." A KLUE spokesman said the lightning "caused extensive damage to radio equipment."
It was Phil Ransom who said a book by Lennon, “A Spaniard in the Works,” contains “anti-Christian comments that would make the godless Russian leaders blush.”
Read more »
Posted by mn6024 at 7:03 PM 2 comments: